So life in NZ is pretty good. We may be a little out of the way as far as the bulk of internet content is but that’s slowly changing with more content being cached onshore.

But… there’s still a lot of stuff that the states are keeping to themselves. Sites like Netflix, Hulu Plus and HBO GO (among others) that offer movie or TV streaming services in the US and UK for example, are not available in NZ. Netflix is one that’s received a lot of attention lately – for those of you who aren’t familiar with it, Netflix allows you to stream a large selection of movies on demand for a simple subscription fee, not a pay-per-movie. There’s streaming TV also, the options are vast.

Now, there’s been a lot of people posting details on ways to get around this geographic restriction, and even more speculating why it exits in the first place, but be it political, commercial or whatever other reason, get around it we shall. I decided it’s time to help piece together some of the bits around the net and hopefully give enough info for novice and advanced user alike.

I’m going to show you a few different scenarios to get yourself connected to all that content, but before we start there’s a few things to be aware of:

Lets start with probably the easiest scenario. Do you have an Apple TV? Yes? Excellent, you can get up and running pretty fast. 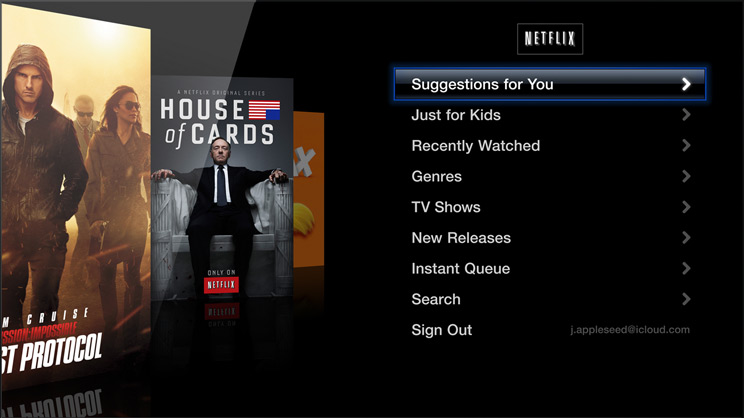 This setup on the Apple TV will allow you to watch Netflix through it using what’s called a remote DNS, without messing with any of your other devices (e.g. Your desktop computer still won’t be able to access Netflix). This is good for someone who’s not that tech-savvy as there are sometimes unintended consequences of having all your devices use the remote DNS service.

What you should know before you start: Part of this setup requires you to basically tell your Apple TV that you live in the US. This works fine for our purpose but does have a side effect that you can’t use your NZ iTunes account from the Apple TV. Not a big issue for most, but if you watch movies purchased through Apple iTunes you need to decide if Netflix is a suitable replacement.

Still keen? Sweet! First head on over to Unblock us. It’s a service that helps you get access to the right information (it’s the remote DNS service I just mentioned). If you want to know more there’s info on the site, but in my opinion it’s one of the best ways to do it, so just do it. You can register for a free week trial, or $4.99/month (USD). They have instructions for lots of devices, but the version of it for Apple TV is here.

Note that you have to change both DNS and location settings to make it act like it’s in the US. Once that’s setup, you should see and be able to use the Netflix application on your Apple TV to connect.

Assuming you don’t have a Netflix account already (from time overseas or by registering an account at someone else’s place that has this going already), the Apple TV Netflix account should let you set one up. Just follow your nose, it should be self explanatory (I did mine over a computer but I’ll review the app method more if people are getting stuck). If you have to enter a postcode for your *cough* US Address *cough*, just use the good old 90210.

For those who aren’t just satisfied with getting it up and running but want to find out what else might be possible, Apple have a little marketing blurb that gives you an idea of what else might be out there which you can read here!

That’s it for now. Next on the list… well we’ll see. If there’s a particular device you’d like to get up and running or if you’re still having trouble, leave a comment down below and I’ll see what I can do to help.

42 thoughts on “Netflix and other US restricted content in NZ”